The town of Dunkeldorf

These days in Dunkeldorf are filled with joy and festivities; It’s time for the yearly Moon Festival!
Every year, a Moon Eclipse happens over Dunkeldorf and it can only be seen from the town and the nearby surrounding area. People from afar travel to Dunkeldorf for this yearly event, both to see the “Blood Moon” but also to partake in the town’s celebrations during the festival.

But this year is different from the others before.. The Blood Moon continues to linger in the sky night after night. Weird things start to happen in Dunkeldorf, and the townsfolk are not nearly as safe as they thought they were, during this time of celebration. 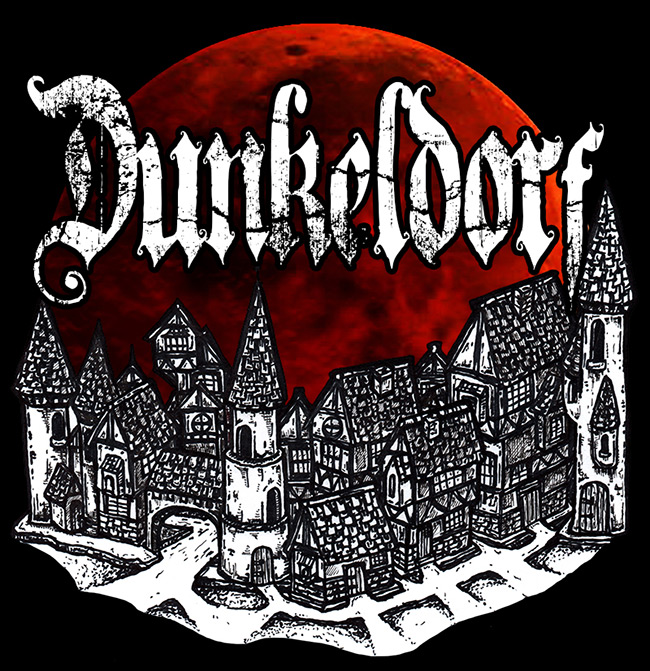 The Powers that be

The town is run by a villainous and unpopular Burgomeister “Herman Geizhals” and despite several attempts by the townsfolk in the past, to overthrow Herman, he continues to stay in power.
The last riot resulted in more than 20 townsfolk being hanged, and since then things have been quiet on the rioting-front.

Herman has a private group of guards to protect him and his manor. These guards are under the command of Reiner Krukenberg, a corrupt man who will do whatever it takes to please the Burgomeister of Dunkeldorf.

Herman has a huge manor, throws lavish feasts for the Dunkeldorf nobility and generally has a very expensive taste in food that he consumes in absurd amounts.
Who pays for these luxuries? Well, the townsfolk of Dunkeldorf of course! The ruthless Bailiff Eva Eilhart makes sure that the Burgomeister gets every single coin he’s owed, as she goes from door to door to collect taxes throughout Dunkeldorf. 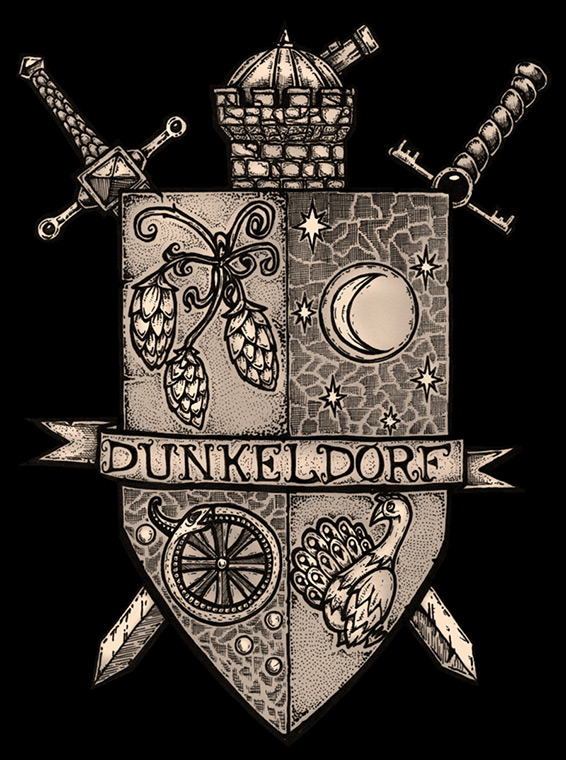 The Dunkeldorf Coat of Arms

The Peacock
The Peacock represents the now famous tavern in Dunkeldorf, called “The Prancing Peacock” this tavern was the place where the Geizhals and Struttendorf families finally made their peace. The tavern is as popular as ever and is often the first location travelers visit.

The Spoke Wheel
The Von Struttendorf’s are now the wealthiest family in Dunkeldorf and arguably in the entire region surrounding Dunkeldorf as well. The main reason for this is because of their very successful Coaching Line.
The four pearls each represent another major noble family from Dunkeldorf.

The Hops
These represent the sweet, yet strong and hugely popular “Moon Ale” – Brewed by a female dwarf named Dolna. The ale is based on a top secret family recipe. A rival brewer in Dunkeldorf is doing everything he can to get his hands on the recipe and to sabotage Dolna’s brewery in the process.

The Moon and Observatory
The thing that makes Dunkeldorf especially famous is the yearly “Moon Festival”. A strange weather phenomenon happens over Dunkeldorf every year. A lunar eclipse, the moon becomes red as blood.